The Stan Erhart Band | BIO
By way of Kansas City & Chicago to San Francisco ...
Stan's roots go back to the Kansas City farm, where tractors, country guitars, & Dad's harmonica tunes were the everyday background. As a kid, he first picked up his brother's baritone horn, followed by guitar, vocals, & woodwinds, later earning a music degree in Michigan. Long gig commutes to Chicago led to moving there to make a living at club work & private lessons, all the while working on his own blend of R&B, Rock, & Blues. Finally relocating to San Francisco, he formed one of the region's hardest working groups, playing clubs & events all over the Bay Area. They can keep 'em dancing at showcases or deliver a nice cocktail hour to the dinner crowd. The Band Dishes up Big Plates of Roots Rockin', Good Timin', Music -- With a Little of Everything on the Side! 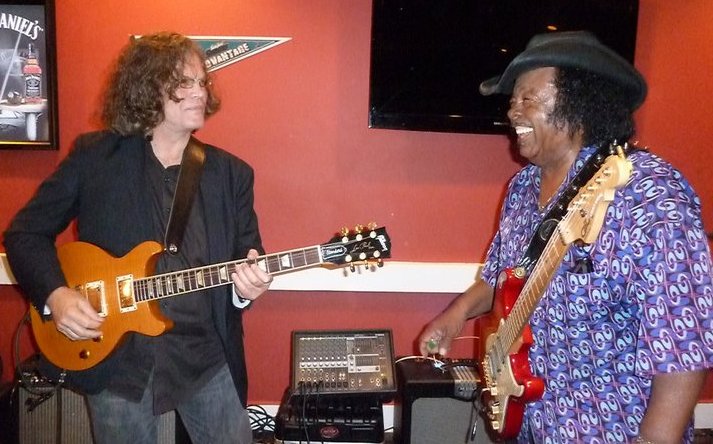 Stan has hosted a number of Metro Fest 'Before & After Parties' at San Jose venues such as the Fairmont, the Radisson Plaza Hotel, and the Clarion Hotel. These events attract some of the best bay area blues players, and have included jams with Guitar Shorty, members of a Roomful of Blues, and many other festival touring acts.

Working with creative musicians is its own reward, and Stan is always up for it. He enjoys a long collaboration with Michael Warren (Bassist for Merl Saunders, Leo Nocentelli, Harvey Mandel & others), and he recently released a collection of originals and roots cover tunes recorded at Garth Webber's Red Rooster Studio in Berkeley, CA. The CD features Stan on lead vocals & guitar, Michael Warren on bass, Randy Hayes on drums & backing vocals, Nancy Wright on tenor sax, Mike Emerson on keyboards, and Garth Webber's killer guitar on two tracks.

Since moving to the SF Bay Area, Stan's played thousands of gigs, hosted numerous kick ass jam sessions (including the Coastside Jam near Half Moon Bay, CA, which is one of the oldest jams in the Bay Area), has backed a multitude of musicians & singers, and continues to produce fun blow out events -- such as the long running Vets To Vets Blues Festival in Princeton by the Sea, CA. Stan was one of a long line of accomplished guitar players providing support for harp master Little John Chrisley. He was the musical director for power house vocalist Marla Goody's 'Good-N-Plenty' Band. He's produced demos for aspiring songwriters, and recorded and performed with stellar bands such as Risk! (Chicago), Eddie O'Neale (Michigan & Chicago), Lost Luggage (Chicago), and Dean Leto & My Blue Soul (SF Bay Area). He's produced/co-produced shows at iconic San Francisco venues such as Slim's and the Great American Music Hall, and he's helped with numerous musician benefits. It's been a good road so far, and there's a lot of traveling left to do.